This video reviews the scenario output in PPA. Duration 6 min. The results of the PPA scenario output are divided into 6 tabs:

All output views are read-only except the Projects tab, where you can move projects between the included/excluded lists and rerun or take other actions on the scenario.

The Info icon displays the prorated value and the original value. See Thresholds and Defaults for more details on adjustments affecting proration.

Residual capacity is the remaining capacity after resources that were included in the scenario have been assigned. See Interpreting Capacity for more details.

Resource utilization is the percentage of resources allocated (allocation/capacity).

Project costs for PPA are taken from allocations (labor costs), task costs (non-labor costs derived from summary tasks), and financial entry costs. Labor costs are based on role rates (not the resource rate).

Note that utilization calculations are influenced by the Use Full Resource Capacity setting. If this property is not selected, whatever resources are already allocated to projects outside of the scenario will remain committed to those projects.

The Heatmap always will reflect available capacity across all projects, those included in the scenario and those outside of the scenario, therefore the Use Full Resource Capacity setting does not impact it. This is because the Heatmap cares how utilized someone (or some role) is; you'd still want "fully utilized" to be 100% so combining the external projects and the scenario projects makes sense.

PPA potentially generates optimization suggestions, which when available appear on the Scorecard tab (either next to or below the scorecard). Suggestions are generated by analyzing shortfall data and calling attention to opportunities to improve the scenario value at small incremental cost. We hope that these suggestions will help decision makers zero in on potential adjustments without having to read through all the excluded projects. The following are situations that might trigger a suggestion: The Bubble chart is a visual representation of your optimization results. Green bubbles represent included projects, red represent excluded projects. You can hover-over any bubble to view details.

Select a value from the Group By droplist to arrange projects according to the selected field value, if any. This droplist is configured when the PPA environment is set up and typically uses fields like Project Type, Department, Status, and so on. If there are no values in the droplist, then none were configured. 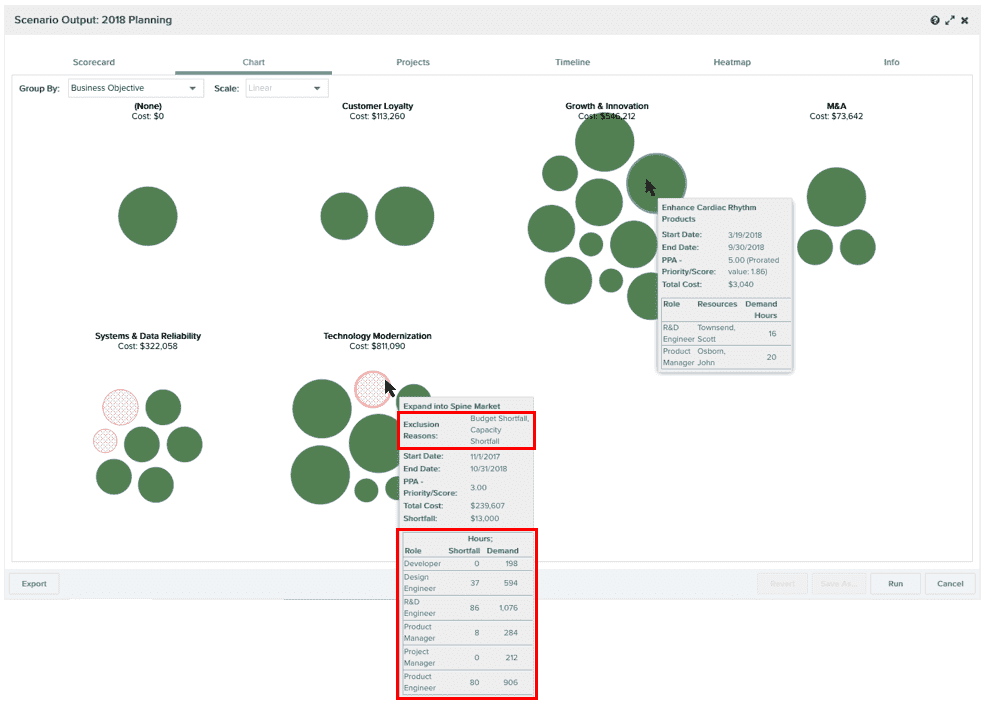 The Projects tab displays a list of included and excluded projects in the top pane. Select a project (either included or excluded), and view its contours in the lower pane.

If a project was not included in the results, it means that you can realize more value (based on the optimization parameter) by including a different set of projects, given the constraints of budget, time, and resources. For each excluded project, one or more exclusion reasons are provided to help understand specifically which of the constraining factors led to that project being excluded.

Note that the PPA system respects project dependencies, and will make sure predecessor projects are scheduled prior to successor projects. The engine will also consider the score of the entire set of dependent projects during the scheduling process.

There are 4 reasons a project can be excluded from a scenario. Each type is represented by an icon, shown below.

Budget -  Not enough budget to accommodate this project. There is insufficient budget in one or more weeks of the planning horizon.

Dependency - This project depends on another project which was either excluded or placed too late in the scenario timeline to enable this project to fit in.

Resource  - One or more roles do not have enough capacity. There is insufficient capacity in one or more weeks of the planning horizon for the identified roles.

Timeline - This project is too long. The total length of the project, plus any predecessors, exceeds the planning horizon by more than is allowed by the partial allocation threshold.

You'll see this exclusion information when you hover over a project in the Projects list, bubble Chart, or Timeline. For example: It's important to note that exclusions are calculated individually. They are intended to provide a general idea of why a particular project was excluded and identify significant gaps in capacity in particular roles. There is no guarantee that increasing the budget, resource capacity, or timeline by the shortfall amount will result in an excluded project being included in a subsequent run, because other higher-value projects could be included or shifted, consuming that extra capacity. The PPA engine will always attempt to obtain the highest aggregate value of the optimization parameter, given the constraints of resources, budget, and time.

For each excluded project, the engine calculates the spot where the minimal shortfall will occur; for resource and budget shortfalls, these dates are presented as "best fit" dates on the Projects output tab (see below). Budget and resource shortfalls are calculated by examining the difference between the residual budget/capacity and the project's cost/demand at the point in the schedule represented by the "best fit" date. Again, remember that each excluded project is analyzed individually.

You can drag a project from one category to the other and rerun the scenario by clicking Save. The new results will be displayed in the output. If you want to preserve the initial scenario results, click Save As to rename the scenario when prompted and re-run the scenario. In addition, if you make any edits to the scenario, such as including/excluding, Save As automatically reruns the scenario.

Hover over any recommendation icon to view details.

Note that for Resource or Budget shortfalls, the engine calculates "best fit" dates, which are the dates the engine used to calculate the smallest shortfall for that particular project. See "Best Fit" dates above.

The Demand and Capacity pane displays resource-level contours for included projects. Each contour includes a resource and their capacity for that time period (either full capacity or that available to PPA, depending on the "Use full capacity" setting). It's possible to have a contour with no resource specified if you have required projects but have insufficient capacity to cover them.

For excluded projects, role-level contours include demand and residual capacity. Residual capacity (for a role) is computed by taking the total capacity available to the scenario for all resources in the resource filter who have this role (either full capacity or that available to PPA, depending on the "Use full resource capacity" setting), and then subtracting the role demand for each of the included projects in the scenario. Note that a role can be a primary or secondary organization role. 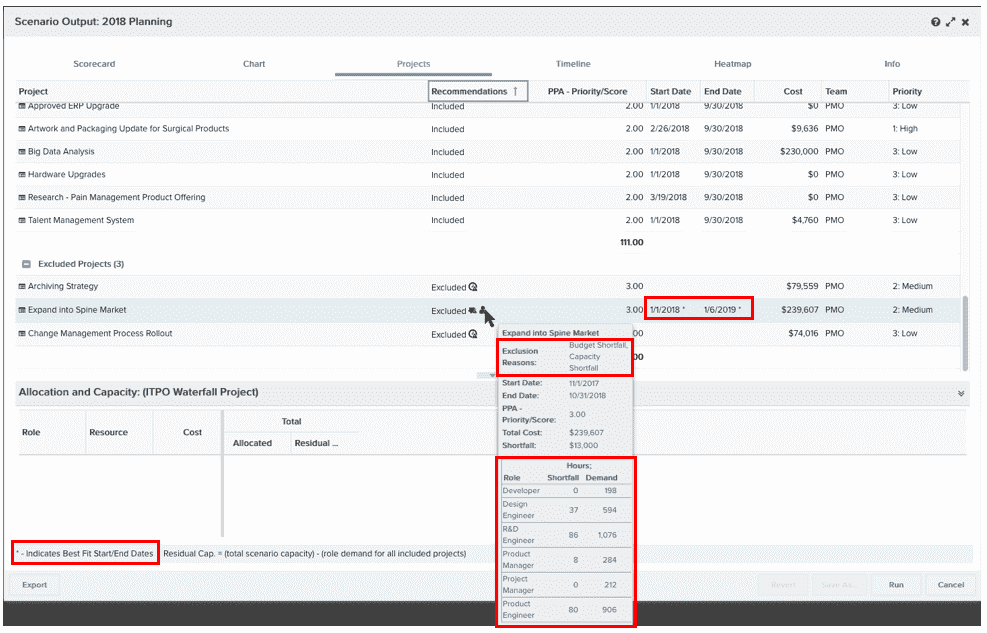 The Timeline displays a Gantt chart showing % utilization (allocated hours / capacity hours * 100) for each period for all the included projects (see Interpreting Capacity for more information). The white background represents the planning horizon. A light gray bar represents an original project, and its corresponding blue bar represent the optimized/shifted version of the project. A blue bar without a gray bar means that the project did not need to shift dates. Hover over any bar to view details.

The column chart at the bottom of the screen shows the top four Roles (based on highest utilized roles). The legend to the left identifies the roles.

The striped portion of each column represents resource utilization on projects not included in the scenario. You only see striping if the Use Full Resource Capacity option is not selected. 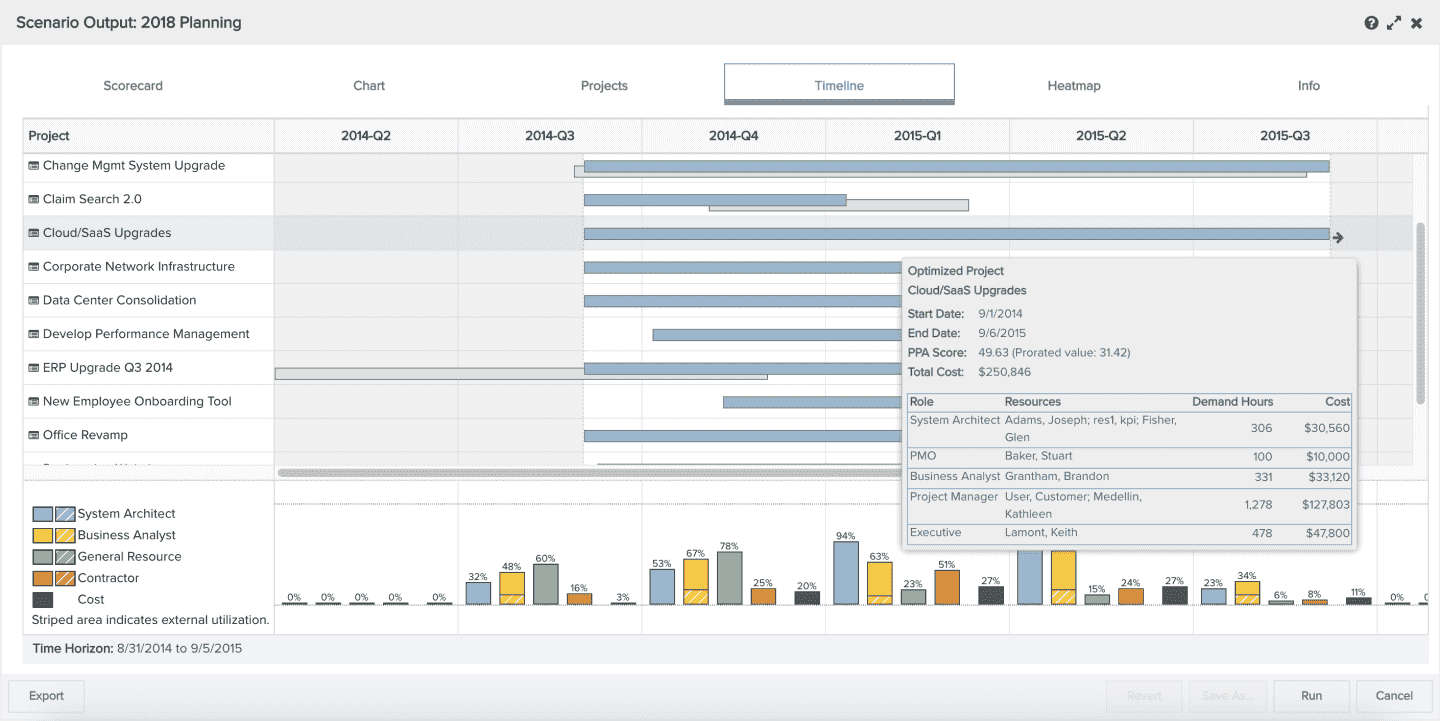 Heatmaps provide a visualization of role/resource utilization over a time horizon. It allows you to see if you might be able to work on more projects if you had additional roles or people. For example, if you were short on Testers but had ample Developers, perhaps you could ask some Developers to take on a Tester role for a time.

You can display heatmaps for the top 5 roles by utilization or capacity, and top 5 resources by utilization. You can display heatmaps before optimization, after optimization, and before & after optimization together. The default heatmap type is configured during PPA setup. As noted earlier, the Heatmap always will reflect available capacity across all projects, those included in the scenario and those outside of the scenario. This is because the Heatmap cares how utilized someone (or some role) is; you'd still want "fully utilized" to be 100% so combining the external projects and the scenario projects makes sense.

Hover over any week to view details. 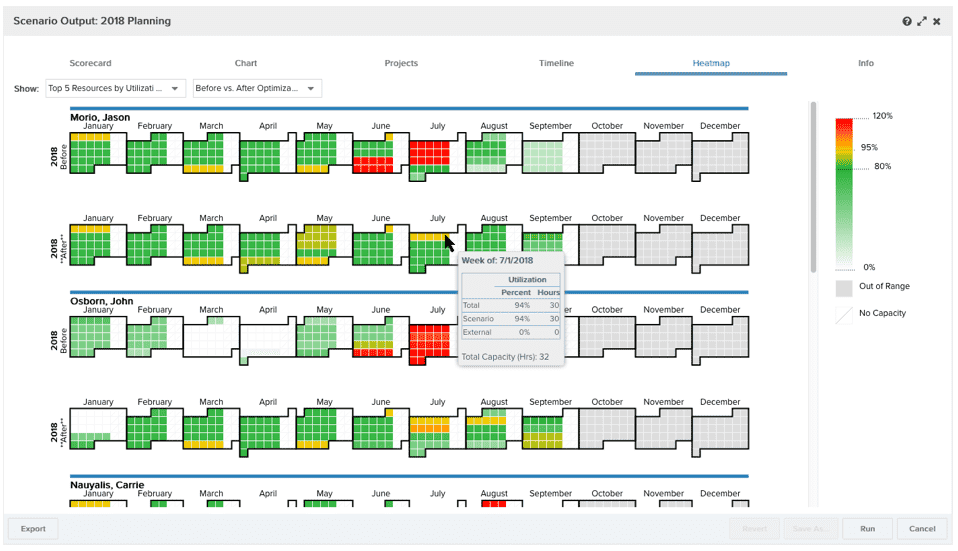 The Info tab displays a summary of all the information that was fed into the PPA engine. 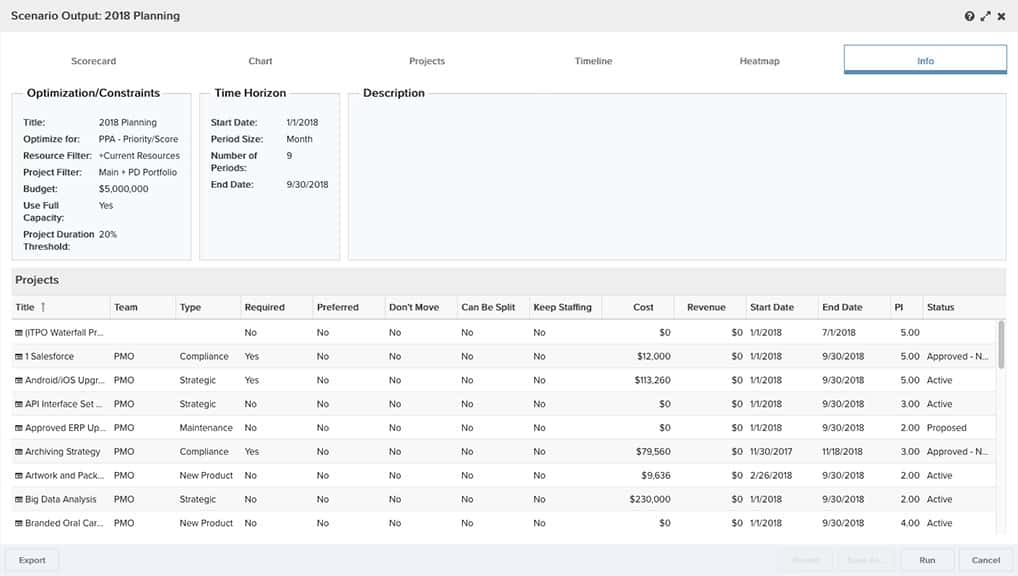 Every scenario output has the following possible actions, represented by buttons at the bottom of the screen: