The report designer's Variable Settings tab is where you:

You can configure reports to be run from the Reports list of any of the following entities: project, portfolio, resource, division, department, organization. Those report lists are generically referred to as "entity-level Report lists" and must be selected manually. You can also run reports from the main Reports list that you access from the top-level Report navigation icon ("top-level Report list") - no provisioning required, reports are automatically shown on that grid. It is important to understand the implications of running from one grid or another:

Where a report is run provides the implicit context, or "scope" of the data on which it will run. For example:

Note: Remember that you are reusing the same report definition on each grid you select - no need to worry about report count bloat. Our existing customers who are familiar with legacy report are accustomed to writing a report for each report "Target", which is essentially each grid; you no longer need to do that. Now back to your originally scheduled programming :)

To place a report at any entity-level grid, simply check the box next to each entity you want access to the report - see screenshot 1 below. There is no checkbox for the top-level Reports list, since all reports can be accessed and run from the top-level Reports list by default. Remember that in addition to checking the boxes, the report consumer must actually run the report from the specified entity grid(s) - simply checking the box does not scope the results to that context/data set.

Which Grids are Available?

The list of available grids is determined by the report Topic you selected on the General tab; the list of grids will always be "containers" (higher in the hierarchy) for the Topic, as well as the Topic entity itself. For example, if your Topic is Project, then your available grids will be Project, Division, Department, Organization. In the screenshot below, the Topic is Project, and the possible scopes are Project itself and all entities that contain projects (Organization, Division, Department), as shown below: 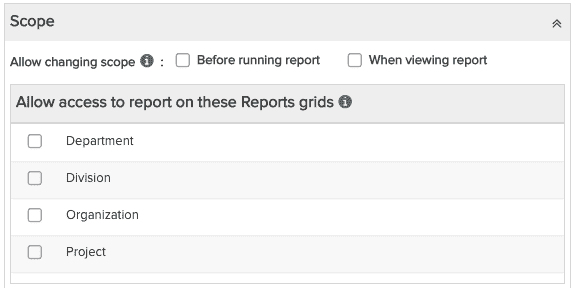 How Do I Know Which Grid(s) to Put a Report On?

How does a user know which scope to select, at runtime or upon viewing the report output? Think about what the data set needs to include. The broadest scope (returns the most data) is "organization", meaning report data is pulled from the entire organization. A scope of "project", for example, would narrow the data set to a single project. A Department scope would return data related to one department (which is significantly smaller than the Organization, but can include multiple projects).

For example, using the screenshot below, if you select the Projects grid, then the report will be available on the Reports list of each project. When you run the report from a project, the report will be automatically scoped to the current project. You can select multiple grids to make the same report accessible for multiple entities -  all from within the same report definition. The report will reflect different levels of data based on where it is run. Each data set will include all entities below it in the hierarchy - for example, the Portfolio data set includes projects).

Check the box next to each entity(ies) whose scope makes sense for the report. For example, if you check Division and Project, then you can run the same report across specific projects; then, if you want to run across all projects, you can run at the Division level. Reports are always available at the top-level Reports list.

Running a report from an entity-level Reports list is one way to automatically scope a report. Additionally, you can grant users the ability to change the scope (context in which the report is run) when running and/or viewing the report. You grant this ability by enabling the setting "Allow changing scope" that appears near the top of the Variable Settings tab. When you enable this setting for a report, the user running the report will see a Scope droplist on the rendered report - the user can simply choose a scope and the report will be re-run on the selected data set. The setting and the Scope menu are shown below.

You can use filters to further refine the data to report on by using the meta-data associated with the entity (topic) to narrow the results set. For each entity (project, task, project log) that you select in the report definition's "field path" on the Data tab, an ad-hoc filter will be added to the Variable Settings tab, which you can optionally enter filters.

Similar to choosing scopes at runtime or when viewing the rendered report, you can change filters the same way. At the bottom of each entity filter control are two checkboxes: Allow changing filter: 'When running' and 'When viewing'. You can choose either or both options.

If you select 'When running', when the user runs a report they will be presented with a Runtime Options modal showing that filter as an option and with any filters previously set by default. For example, if the report has a filter configured for 'Agile Projects' and the option to allow changing that filter when running the report is selected, then the Runtime Options modal will appear with the filter control editable and defaulted with 'Active Projects'. The user can then change the filter before running the report. 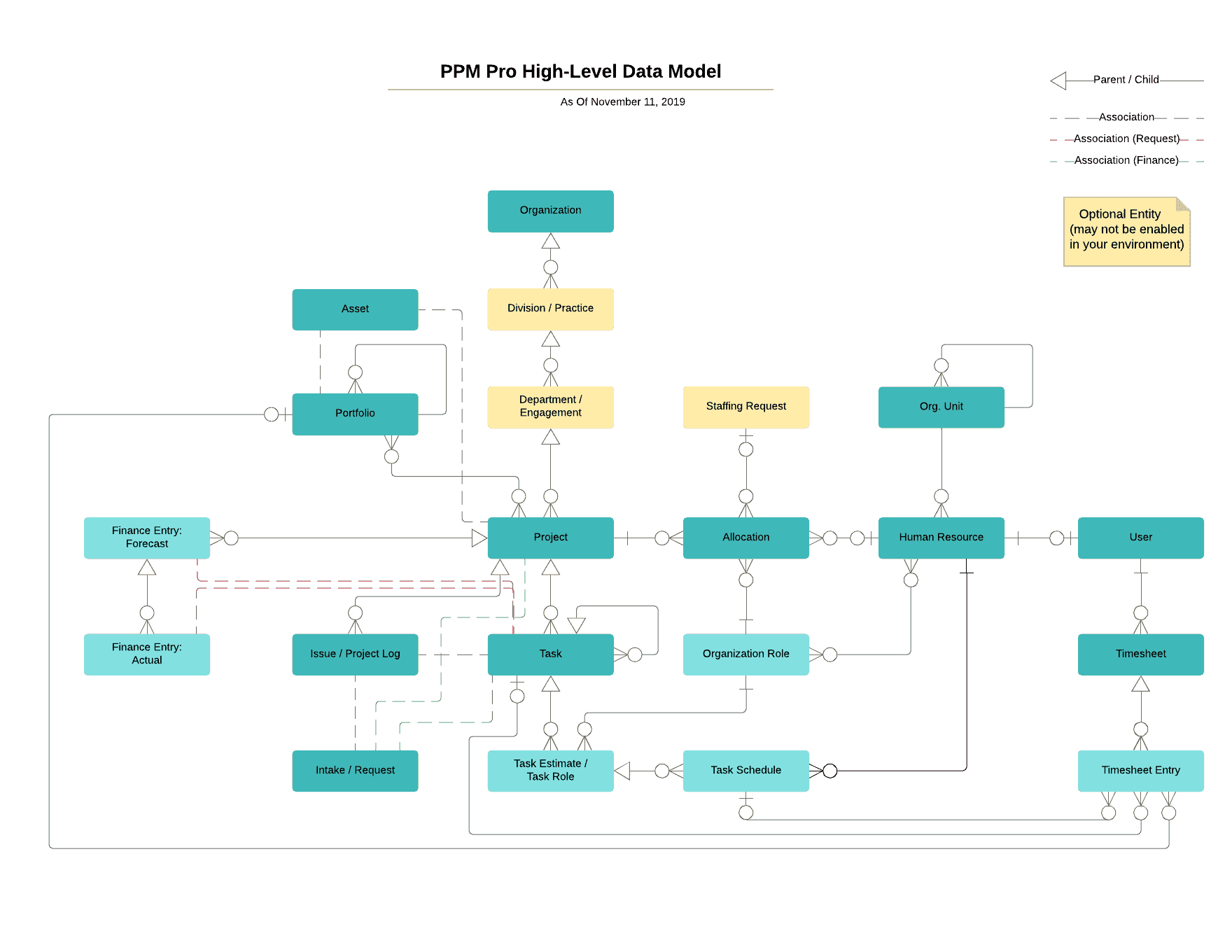 Similarly, if you allow changing a filter when viewing a report, then after the report is run, the filter control will appear at the very top of the report with whatever filter had been originally configured or set at runtime defaulted. The user can again edit the filter while viewing the report output. Visit How To Build... for information about building various reports.